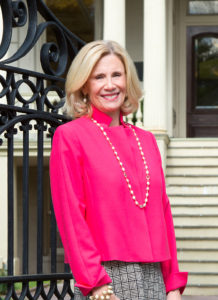 Esteemed member of the Junior League of New Orleans (JLNO), Margaret “Margo” Sanders Phelps has been named JLNO’s 61st Sustainer of the Year.

Since 1958, JLNO has presented the prestigious Sustainer of the Year Award to a sustaining member who exemplifies the organization’s educational and charitable mission. Recipients of this honor have demonstrated a commitment to promoting voluntarism, developing the potential of women, and improving communities through their commendable action and leadership.

A lifelong New Orleans resident, Margo’s commitment to her home and our collective community sets an extraordinary precedent for active and sustaining Junior League members. Thoughtful in her causes and purposeful in her mission, Margo’s dedication to the city has enriched New Orleans and set a high-bar for Junior League members. Current JLNO President Maria Pardo Huete said, “I hope that active and provisional members look at Margo and know that their membership in JLNO is but an opportunity to finely tune their interests and to find that which fires up their inner heroes to continue to make a difference after their active years are over.”

In many ways, the entry point for Margo’s community involvement was the Junior League. As Margo said, “It never entered my mind that I wouldn’t be a League member—my mother lived and breathed the League!” Her mother’s involvement was a hallmark of her childhood, and she remembers fondly returning to her house filled with chrysanthemums after her mother’s committee meetings. In fact, she still holds onto the original recommendation letter for her League placement years ago.

Read more about Margo’s accomplishments in the Spring 2017 issue of Lagniappe magazine.

Nominations for the Sustainer of the Year award come from JLNO’s Sustaining and Active membership. A committee then reviews nominations and letters of support to determine the award recipient.