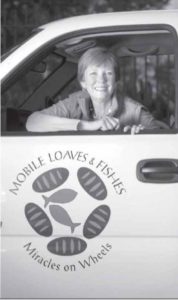 “Been There, Done That,” Alice Wright says with a smile, recalling her first thought at seeing balloon-bearing women in her Eleanor street home around Christmas last year. The last time such a group descend on her doorstep, they were asking her to serve as 1989-1990 President of the Junior League of New Orleans.
This time, the balloons were an announcement – a celebration of accomplishment – not a supplication to serve. Alice had been chosen Sustainer of the Year

“This award was totally unexpected,” Alice says. I was truly awestricken. It was out of left field.”

A surprise to her, maybe. But, history tells the tale of a woman who has heeded the call to service time and time again.

Alice is a New Orleans native and a born volunteer. She grew up on Lowerline Street, attended Audubon School, Louise S. McGehee and Newcomb. While at McGhee’s, Alice got her start as a volunteer at Kingsley House in the Lower Garden District. Years later, Alice would serve as president of the Kingsley House board.

Alice joined the Junior League of New Orleans in 1978, while pregnant with her first child, Matthew.

“My mother wasn’t in the League,” says Alice. “So I didn’t have any pre-conceived notions of what it would be like.”

“I was looking for adult companionship, and I needed to be around people who were doing something useful – not always talking about babies,” Alice says.

Sue Jumonville was her provisional advisor. From Sue, Alice says, “I got a sense that the League did a lot of good for the city. I’ve always been a big believer that women can do anything, and that was enabling.”

She can’t remember her first placement, but her favorite League job was as Community Council Vice President under Ella Flower.

“That’s really where my heart lies,” Alice says, “helping those who are less fortunate that I.”

So it comes as no surprise that her second favorite position was in Project Processing, researching proposals that came to the League for funding.

“I wasn’t very hands-on, but I just loved giving money away.” Alice says.

Alice says she values her experience on the Admissions Committee and working at the Thrift Shop as a provisional and a board member. “I saw a real need in the community for it then,” Alice says. “And I still think it serves a great purpose.

“League meetings were fun,” Alice says. “They were all about meeting people and gathering new perspectives. I always thought the League gave good experience to people that they might otherwise not have a chance to try.”

As President of the Junior League, Alice says, she made “not only good friends here, but friends around the country.” She and several past presidents from other Leagues still meet regularly.

Friendships aside, Alice sass she was naturally receiving valuable training for her career and service to other charitable agencies and boards in New Orleans. “It taught me so much, from parliamentary procedure to consensus building.” Alice says. “Skills I’ve used in every job I’ve ever had. And all of that stuff is by osmosis.”

Alice’s work has been varied, but always with a community bent. She’s worked for the Office of Mental Hygiene; as editor of GO Magazine; and as director of development for Trinity Church and School. Alice has also represented the Junior League on the boards of many charities in the city.

“The training is unsurpassed. I think everybody – men, women – should have three years of the Junior League as a requirement.”

Her husband of 25 years, Bill, concurs. While on Katrina evacuation exile in Athens, Ga.; Bill and Alice watched CNN in horror, as helpless New Orleanians waited for aid.

“They should put the Junior League in charge,” Bill said. Until that time, Alice says, “I never knew he felt how good we were.”

When Alice and Bill returned to New Orleans, she was asked to coordinate Katrina relief for Trinity Church. She started the Mobile Loaves and Fishes ministry, which feeds 75-100 homeless people and workers and volunteers six days a week. Volunteers for the project prepare sandwiches, snacks and warm or cool drinks (depending on the weather) and set off around the city in a catering coach to find people who need a meal.

“Homeless in New Orleans is a new definition,” Alice says. “We go to spots where there are workers. Then we drive around neighborhoods feeing residents. We go everywhere, feeding people who are helping us renew and feeding people who need to be renewed.”

She says, “Trinity School, Trinity Church, McGehee’s, Kingsley House, Junior League – all have had a huge impact on my life. I hope I’ve had an impact on them.”

One area in which Alice hopes to have a similarly huge impact is encouraging women to get regular mammograms. After leaving the past presidents of the Junior League luncheon last year, Alice had a mammogram then left New Orleans for Chile, where her son Matthew, was studying for an international MBA. When she returned, Alice learned she had breast cancer. To her relief, Alice was able to force the cancer into remission with seven weeks of intensive radiation treatments.

“I am very lucky that I was able to have it [treatment] here in New Orleans,” Alice says.

Along with the cancer came some soul searching for this committed, involved, dependable Sustainer.

“Cancer changed my perspective,” Alice says. “I wanted to be able to do what I wanted, when I wanted to do it.” She found her own replacements at Trinity and “retired.” But a born volunteer doesn’t just stop.

Going forward, Alice sass she wants to “continue volunteering. It’s what I do. Hopefully I’m making a difference.”

Alice was honored publicly as the Legends and Lagniappe Gala in January. That night, between happy bouts on the dance floor, Alice thanked her fellow Leaguers profusely for acknowledging the long Junior League journey of this mother of Matthew, 29 and Carrie, 27, wife of Bill and past teenage Kingsley House volunteer.

She humbly expresses thanks and wonder at the tribute.

“The greatest thing to me,” Alice says, “is that my neighbor is the one who nominated me.” That a Natchez to New Orleans transplant, nearly a generation younger “could see…what I do and what I stand for. That she could see that.

“The League gave me friends – people I would never have known. It did keep me from talking about babies, but we are all ended up having our babies together anyway. … It’s been a wonderful opportunity.”

Alice still sees the League as important as ever.

“I’m a native New Orleanian and I love the city. There’s so much wrong and has been for years, but I think the League makes such a difference. We know how to get things done. We know how to organize, how to build consensus – not without controversy – but thngs can still be controversial and run smoothly,” she says.

“It opens doors if you want to be involved in the community. The learning will serve you forever.”

Congratulations Alice and Thanks for Making a Difference