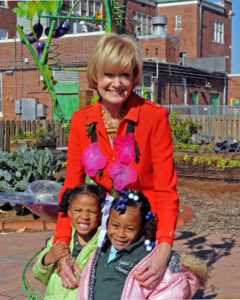 Beverly Reese Church is no shrinking violet. In fact, it seems as though she has never shied away from an opportunity to help someone else, or someplace-like her hometown of New Orleans-brightening everything she touches with her zest for life.
Some may know Bev by her titles: executive editor for St. Charles Avenue magazine, author, designer, chairperson, board member. But two words sum up what many on the receiving ends of her efforts call her: “total sunshine.” Her friend Sybil Favrot describes her that way and adds, “she cares passionately about our city and its inhabitants.”

Still, all Bev says, all she could think when told she’d been chosen the 2009 Sustainer of the Year was, “You have the wrong person!”

Her selection doesn’t seem off to someone who knows of the efforts she has put forth for countless people and organizations over the years. It’s in her blood. Bev’s mother, Beverly Hess Reese, was a president of the Junior League of New Orleans. An “exceptional role model,” her mother routinely brought her children along to witness league activities. Bev began her own ventures into voluntarism, working on a cause familiar to all Junior Leaguers, children’s education.

“I think the thing I am most humbled by is that my mother would be so proud of this honor. I can see Mother looking down from heaven, saying ‘I’m so proud’,” Bev says.

Lately, Bev has been volunteering weekly in the Edible Schoolyard at Samuel J. Green Charter School, an organic garden used to teach students about healthy eating and seasonal cooking. This project harkens back to her early days of teaching in area public schools.

With the ink barely dry on her Newcomb College degree, Bev was teaching 43 third graders at McDonough #1. She sought out creative solutions to overcome obstacles she faced in the classroom.

One of her ideas was to bring her friend folk artist Clementine Hunter’s artwork to school. She feels the works exhibit lessons of passion, determination, history and, of course, art. But the most critical concept Bev hopes that she instilled in her students is the importance of making a difference. She explained that Clementine Hunter had meager roots, but was able to gather necessities and help her community tremendously through selfless actions.

Bev’s concern for children and local public schools goes beyond teaching. She has been heavily involved in the New Orleans Council for Young Children, the Children’s Health Clinic at Lawless School, Dollars for Scholars, Children’s Hospital Sugarplum Ball and the Cub Scouts, to name a few.

Perhaps her most visible contribution to children in New Orleans was spearheading the complete rebuilding of City Park’s Storyland in the 1980s. No small feat, the Storyland project idea arose while Bev was working on City Park’s Botanical Gardens, which had been recently rejuvenated and was hosting tours for school children.

Some of Bev’s other designs for improving her surroundings include past league projects such as the Clean City Committee, which she participated in under the supervision of Mayor Ernest “Dutch” Morial. Post-Katrina, she heard the call for help and raised $150,000 for the Make It Right Foundation, enough to build a home in the Ninth Ward.

Bev lobbies Washington D.C., for New Orleans’ recovery as a member of the Women of the Storm and the New Orleans Town Gardeners. A “green living” proponent, Bev is conservation chair in the organization, which lobbies for clean air and water among other issues.

While busy with all of her volunteer work, Bev maintains very close ties to her family. She stresses that her accomplishments would not have been possible without her support group of wonderful relatives and friends. She has been married to Dr. Johnny Church for 43 years and they’ve raised two sons, John Mark and Ford. Bev is especially proud of son Ford’s founding of the Cottonwood Institute, which aims to “inspire the next generation of community leaders.” It sounds like the apple didn’t fall far from the tree!

In her volunteer work, Bev says she has been inspired by the Junior League’s methods. She sees a wonderful benefit to the community when the league identifies an issue, devises a strategy and builds an infrastructure to take the project into the future.

“I think what the Junior League teaches you is if you are passionate about something and committed to it, you can make anything happen,” Bev says.

One could call Bev a mini-league: calling on friends when she sees a problem, addressing the issue and preparing the public to carry on the good work, rarely sticking around for accolades.