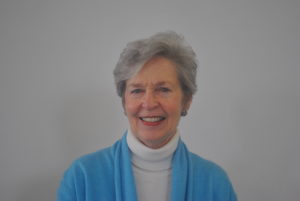 The value of voluntarism was instilled in Janet White Bean as a child encouraging her to be involved in worthwhile projects, she began to volunteer at the young age of 9 years old. Her first position was as the treasurer for a little library. Volunteering became a part of her, incorporated into her life. She continued to volunteer through high school and college and when she had a family she still found time to be involved in things that she thought made a difference.

Janet credits her involvement in those community projects as the catalyst that got her involved with the League. At the time she did not know many League members and because Provisional classes were much smaller then, she was surprised to be invited to become a member.

“It has helped me and encouraged me and better trained me so I’m very appreciative,” she says.

After a short time in the League, Janet was asked to be Community Vice President. The next year she was President-Elect, and was President for the 1981-82 League year. She really liked working with responsible people and appreciates the training she received. One of her favorite lessons was learning how to be interviewed so that she could explain her opinion of something in only a few sentences. This training was especially helpful during her tenure as resident. The League was transitioning to a time when it wanted to show that it was more open, “taking off the white gloves, so to speak.”

Janet has two favorite parts of the League: the community aspect and working with the members. She enjoys getting involved in projects that go out into the community. She states that it “is so rewarding to see organizations in the community start to blossom and build because of the support the League gives them, both financially and especially because of the volunteer support.”

Working with the members is important, too, “because they’re always so interesting. The camaraderie is great and I know it is still there.” That camaraderie makes the work of the League fun and something she wants to continue doing. Janet was even able to use that model in the business world as well. She says, “if you factor in a little interaction, so people get to know each other beyond the surface, they really do get engaged; it’s something that is good for both the profit and nonprofit world.”

Also during her time as President, she realized that the community quite often can use the League as a seal of approval. So if the League, through its process, says that something is a worthy project, it can be used as leverage to the greater community as those nonprofits go out into the community and try to get help and funding. She knows “that is both a huge responsibility and a commendation for us.”

Besides the League, Janet has volunteered in many areas. In the past, she volunteered over a broad scope of projects, but since Katrina she has been trying to focus her attention in a few areas that are most important to her. One thing that she deeply believes in is the educational reform taking place in New Orleans. Through an interest in public education, she got involved in the charter movement and is on the board of Lafayette Charter School, she is an advisor to Sojourner Truth Academy, and is on the board of Trinity Episcopal School. She says “it’s exciting to see young people grasp concepts and know that you’re affecting their future.”

Janet is also very involved in Citizens for One Greater New Orleans. This has been a huge commitment but also incredibly rewarding for her and everyone involved. “As an executive committee member for the past four years, Janet is focused on and committed to transparent, accountable government reform with her primary focus on education,” notes Ruthie Frierson, Founder and Chairman of the organization.

Because Janet’s from northern Louisiana and went to LSU, she has good friends throughout the state. She thinks that is why she was invited to join a group called Louisiana Speaks. She has connected with people throughout the state who are doing things in their own regions and communities. She has traveled to get support for levee reforms and changes to the assessor’s board.

Janet is involved with the Westminster Foundation, which is part of her church’s outreach ministry, working with the elderly. She says, “that’s another area that softens my heart. Because it’s the two extremes, our young people and the elderly, that are really the ones that can’t defend themselves.”

Janet would like to see more JLNO members, both Actives and Sustainers, get involved in advocacy. She knows it may be a little out of most people’s comfort zones, but League members could be very strong advocates for positive change. There are so many opportunities within the community and the state to advocate for certain things, for example, asking the city to allocate funds to a certain area.

All it takes is that one examines her position carefully, finds an issue that is important to her, and finds the right public group where she can affect change. Janet has “always felt that the League does such a good job of affecting change in whatever they decide to do.”

Looking back on her year as President, she says, “I never worked so hard in my life!” One of the things that she is glad of, that emanated from her presidency, is that the League opened avenues for groups to apply for grants from the League even when they do not have a volunteer component.