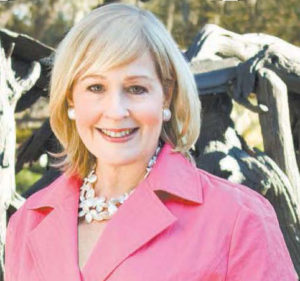 Julie Livaudais George “embodies the values the League holds dear–she has helped develop the potential of women and has volunteered to improve the New Orleans community for decades,” said Melanee Gaudin Usdin in her nomination letter. “Julie lights up a room when she enters with her contagious smile and cheerful countenance” adds Katie Crosby.

Julie, who joined the League because “my mother and grandmother were in the League, and it was what you did” saw the League evolve from a group perceived as “ladies who lunch” to dedicated volunteers tackling social problems in the New Orleans community. Her proudest accomplishment as League President was tackling the “white gloves” stereotype head-on. ”At the time that I was League president, the League on a national basis was encouraging all the Junior Leagues in the United States to help fight the image of the white-gloved lady who lunches, plays cards at the country club, and plays a little tennis.” The League’s involvement with Teen Court was the subject of a Gambit Weekly cover story. Julie recalled that the reporter seemed surprised that the ladies of the Junior League were taking on one of the city’s most severe social problems. ”One of things that fascinated him the most was, ‘the JL, the ladies in white gloves…are getting their hands dirty in Teen Court?’” she said.

Additionally, Julie is also proud of the fact that the League began to evolve to meet the demands of the community during her tenure as President. One of the challenges she faced was “how to make the League more user-friendly for the women in the work force.” Julie points out that she was the first League President with a full-time career. “I think that the message that that sent to the younger girls who came on…when you know the President is still continuing her job and running this organization, everybody can do it in some way or another.” However, “you can’t do it without a supportive family.” She encourages members who are interested in leadership positions in the League to “go for it…get as involved as you can.”

In addition to her service to the League, Julie is involved with numerous community non-profits and boards. ”Julie combines, to tremendous effect, the best qualities of intellect and heart. She shares both generously with a wide range of community organizations, and in so doing exemplifies the Junior League’s tradition of community service,” says Dr. Stephen W. Hales, who serves with Julie on the board of Children’s Hospital. The Agenda for Children, Longue Vue House and Gardens, the Tulane Law School Dean’s Advisory Board, and Bureau of Government Research are among the many organizations fortunate to count Julie as a member. She adds that any description of her should include her involvement with Trinity Episcopal Church, where she served as the President of Women of Trinity Church.

She’s also a top-notch lawyer. A partner in the Labor and Employment Law section of Chaffe McCall, L.L.P. since 1989, Julie has been recognized by the Martindale-Hubbell Bar Register of Preeminent Women Lawyers, Best Lawyers in America for Labor and Employment Law, City Business Leadership in Law, and New Orleans Best Lawyers. Additionally, Julie served as the League’s first in-house counsel.

Julie credits her Junior League experience for providing her with skills to be successful in the non-profit world. ”The things you learn as a member of the Junior League as a virtue of going to meetings and watching how business gets done,” she says. Additionally, she learned “how to be taken more seriously in the New Orleans community, first and foremost, so we could raise money to do what we wanted to do. It was motivated by wanting to be able to really make an impact in the city; therefore we had to be taken more seriously in fundraising so we could get in the funds that we needed to take care of the very acute needs we noticed in lots of areas of the city…when you can do that well, it shows that you are not just ladies in white gloves.”