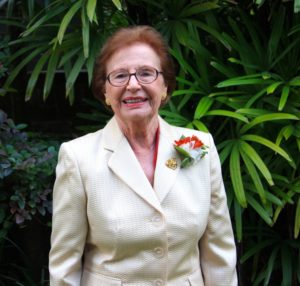 Anyone with a teenager knows what a challenge it can be to raise them. Now imagine taking dozens of teenagers under your wing, teaching them life skills, mentoring them and, most importantly, maintaining a meaningful relationship with them for more than 15 years. It seems a task that would be impossible for one person, but Margaret Wall does not shy away from challenges.

“My passion is working with teenagers,” says Margaret. Holding a master’s degree in physical education from Stanford University, Wall’s first post graduate-school post was at Rice University. After one year she realized how much she missed working with teenagers. “They really fascinate me. I know that’s unusual, but it is true,” she says.

Margaret’s resume of outreach activities in New Orleans would impress the most active of community leaders. She started small with one program and, to read the timeline, things just snowballed from there because of the enormous need in New Orleans for the type of outreach she wanted to do.

Her activities started at St. Paul’s church in the 1980s, where she organized a daycare center to help working parents. At that time, there were not an abundance of childcare options in New Orleans and the program, called Camp Care-A-Lot, grew very quickly. Margaret worked at Camp Care-A-Lot as a volunteer for eight years helping to care for the children in the program. The program grew to accommodate more than 400 children per year. She also started a GED program at the church with one special congregant in mind, who went on to become an ordained Baptist minister.

Margaret moved her volunteering efforts to Trinity Church and began a journey that she is still on today. The Neighbor to Neighbor program at Trinity was started to bring residents of the St. Thomas housing project into the Trinity congregation, especially the at-risk children, and give them mentors. Margaret would visit St. Thomas and go door to door meeting the families and gaining their trust to bring the children to church. She was even able to arrange for 150 children over the years to attend Camp Kanuga in North Carolina and transport them there.

Though the environment at the St. Thomas project was something completely foreign to Margaret at first, she said she never felt in danger there. She talks openly about the drugs and crime that were rife there, but said she always felt protected by the families that knew her. She says the girls she worked with were more successful than the boys because they were not being targeted by drug dealers in the same way.

It was her experiences working in the St. Thomas project that influenced her the most in her work and educated her in such a way that she was able to use that knowledge for all her outreach programs going forward. Through that program she impacted more than 200 children and teenagers.

Through this program and the children she met there, Margaret began coaching volleyball and basketball teams for the teenagers and even took a Double-Dutch team to the national competition in Ohio. She also led Girl Scout troops for the St. Thomas project girls for 10 years and gave them their first experiences with camping, the woods and outdoor activities at Camp Whispering Pines. She also organized a Boy Scout troop through Trinity Church.

She worked with teenage mothers teaching them parenting skills through a Young Life program she started at Trinity. She helped dozens of her charges apply to college and receive grants and scholarships to pay their way there. She estimates that about 50 of the girls she mentored went on to college.

During this time Margaret was also an active in the Junior League of New Orleans. Through the League, she worked as a docent at the New Orleans Museum of Art and learned the museum inside and out. This volunteer experience and knowledge would come into play later when she and group of women brought art education first to Andrew Jackson Elementary and then Ben Franklin Elementary. They would take the children on field trips to NOMA and Margaret was once again the docent.

It was around this time that she heard about Communities in Schools, a program which pays a site coordinator to find community resources to provide for the needs of individual schools. She brought this program to Andrew Jackson Elementary and now it is in its 15th year at eight schools and 22 AmeriCorps workers.

Margaret talks a lot about what she thinks it takes to make a positive impact on an at-risk teenager’s life: “They need to be told and shown that they have choices. By showing them a life outside of what they have always known can open up the whole world to them. It’s really easy to do something short term and have one contact with these at risk kids. If every charitable organization would get involved with just a few kids and follow them throughout their life, they can make a real difference.”

Ellen Ball, who has worked with Margaret at Trinity for more than 20 years writes: “In our work at Trinity, we emphasize that we don’t merely do ‘good works’ but work that is transformational — it transforms the lives of all involved. Margaret’s leadership has transformed many lives.”

Margaret is taking things a little slower these days than she used to, though she is still active at Trinity and tutors with STAIR. She still has relationships with many of the teenagers she helped years ago and is even the godmother to one of their children and recently took him to take the ACT. She enjoys spending time with her two-year old grandson Garrett and visiting with her family.

When asked how her family felt about the enormous amount of time she spent working on all of her outreach projects, Margaret is very pragmatic. “I told them that I only have one life to live and I am going to live it the way I want.”