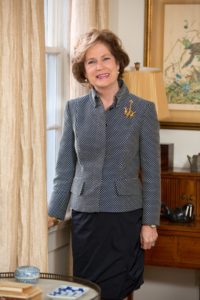 Harriet “Muffin” Balart has been instrumental in helping build a better New Orleans since long before Hurricane Katrina. As a pillar of volunteerism and leadership in New Orleans, she is committed to community enhancement. Her years of devoted service to improving the city and much more have earned her the prestigious honor of 2013 Sustainer of the Year.
For Muffin, volunteering is a way of life. The LSU Alumnus and mother of four, who has 11 grandchildren, credits her own mother with instilling a commitment to volunteerism in her growing up.

“I just always believed and do believe in volunteerism, it’s just part of who I am, and I think it’s a privilege to be able to have the opportunity to give back to your community,” Muffin says.

She began volunteering at a young age as part of her curriculum at Louise S. McGehee School. After she had children of her own, she continued to actively involve herself in volunteering at their schools, St. Martin’s Episcopal School and McGehee. She eventually was appointed lifetime membership on the board at McGehee, an honor that bespeaks her years of commitment
to her alma mater. She took the school’s motto, Noblesse Oblige (to whom much is given much is expected) to heart and set herself on a lifetime path of volunteerism and her work has had a tremendous impact.

Muffin credits her active involvement with the Junior League with leading to the success of many of her other volunteer pursuits. As an Active member she served as Placement Chair, Thrift Shop Chair and ultimately on the Executive Committee. “It was so nice to interact with people and to learn so much about volunteering and managing volunteerism,” she says of her years in the Junior League . “And I think that is such a gift that the League does give to each member because you learn how to be productive and how to be effective.”

She found her passion working with community improvement projects through New Orleans’ Preservation Resource Center. She has been involved with the PRC since its inception in 1974 when the organization was initiated with a Junior League Community Enhancement Grant. She served on the board of the PRC between 1988 and 2002, spearheading many projects and gaining a reputation as an eloquent but hard-nosed defender of historic preservation in New Orleans. She returned again to PRC leadership after Katrina to offer her assistance and through it, she has worked tirelessly in historic preservation.

Her leadership within the PRC led her to begin working with Rebuilding Together, a project she has also helped grow from the ground up. Rebuilding Together New Orleans was initiated in 1988 when the PRC hosted a one-day neighborhood revitalization program in the Lower Garden District. Originally called Christmas in October, the program focuses on renovating the homes of low-income elderly and disabled New Orleanians.

Although the program initially offered assistance rebuilding homes two weekends in October each year, after Hurricane Katrina, it greatly expanded. Based on the amount of national interest in rebuilding the city and the strength of Rebuilding Together’s reputation, it has now become a citywide, year-round effort which has assisted more than 1,200 families and revitalized seven schools and six community centers. As the Executive of the Steering Committee, Muffin is helping to lead Rebuilding Together New Orleans in transition as post-Katrina recovery continues.

Diana Lewis, who has worked with Muffin for over 20 years as a fellow member of the RTNO Board, describes Muffin as “bubbly, effervescent, and wonderful.”

Diana attributes RTNO’s growth to Muffin’s leadership. In her letter of support to the Sustainer of the Year Committee, Diana wrote, “Muffin’s sustained leadership as RTNO Advisory Board Chairman and past Chairman of the PRC enabled RTNO to be a major player in the recovery response after Katrina.

With Muffin’s commitment and guidance, RTNO modified its mission and took advantage of its incredible renovation and volunteer management expertise and its connection to key areas of the city to broaden the program’s scope to year-round or full rehab of a significant number of homes in RTNO’s designated neighborhoods.

Instead of only smaller projects, RTNO began to focus on the total renovation and rebuilding of storm-damaged homes. By reinvesting in and restoring the existing housing stock of the city, RTNO was able to bring low income homeowners back to their homes, as well as provide a model for restoring and preserving New Orleans’ historic neighborhoods.” Patricia Gay of the Preservation Resource Center, who describes Muffin as “one of the most outstanding, dedicated and hardworking volunteers I have ever known,” credits Muffin with RTNO’s ability to expand its reach into the community. “Rebuilding Together has assisted more than 1300 homeowners in need with repairs to their homes, and has been a highly effective tool in neighborhood revitalization. The ripple effect of this program, in conjunction with other PRC programs, is remarkable – far more residents have benefited from a better quality of life as hope and vitality returned to neighborhoods across the city. And Muffin has helped to make that happen.”

Muffin is quick to give credit to all of the individuals and groups that have committed themselves in various ways to the causes that she supports and is clearly passionate about her efforts.

“Corny as it sounds,” she says, “you really do get what you give and (at Rebuilding Together) we just have gotten so much from the volunteers and from the community.”

After a lifetime of commitment to the improvement of her city, Muffin continues to be involved and giving of her time and experience.

“As a friend of mine says, if you’re not part of the solution, you’re part of the problem,” she says.

When the PRC awarded her its highest honor, the Preservation Hero of the Year award in 1998, the executive director Patricia Gay did so, saying that, “There is no honor high enough or worthy enough for Muffin Balart.”

The Junior League feels honored to count Muffin Balart among its Sustainers, graciously thanks her for her years of service and humbly congratulates her on her many successes.