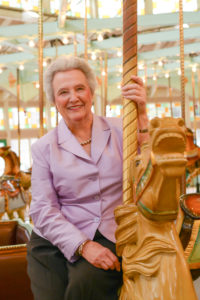 When Claire Ferrier Stahel graduated from the Academy of the Sacred Heart, she was one of only ten students in her graduating class who continued on to receive an undergraduate degree. Claire had a love for learning and exploring that could not be deterred by the standard for women at that time. Four years later, she was one of only four women to earn a business degree from Loyola University New Orleans.

Claire describes how she sat in the front row of the classroom throughout college, so as to focus on the task-at-hand and not be distracted by the fact that she was among mostly male peers. Nothing deters Claire from achieving what she sets out to accomplish. Determination, integrity and grace were born to Claire, as she knows no obstacles. She has been a leader in the New Orleans community for decades and this year The Junior League of New Orleans bestows our highest honor to her as our 56th Sustainer of the Year.

Claire’s service to the Junior League of New Orleans spans decades and is boundless. She has served on the Board of Directors of JLNO, she was the editor of Lagniappe magazine (when it was a monthly publication), she was a member of the JLNO Choral Group, and she served on the renowned Building Watcher Tours, that not only sought to preserve and acknowledge our city’s remarkable building stock, but also emerged as the inaugural fund raiser for the then newly formed Preservation Resource Center (PRC).

Claire was also part of the inaugural team of JLNO women who initiated the efforts to research, document, and photograph our city’s historical building stock. Their findings were first published the in the renowned New Orleans Architecture Book Volume I. Leaders like Claire, who were on the ground floor for Volumes I and II, provided momentum for the great work in preservation that resulted in the remaining five volumes and laid the groundwork for the successful preservation efforts of the PRC. In 1971, Landscape Architecture Magazine called New Orleans Architecture Volume I, “quite possibly the most comprehensive architectural examination of any American city” and further articulated that the volume set the standard for landmark preservation in our country.

After years of making major contributions to JLNO, Claire’s involvement with the Junior League of New Orleans has not diminished in her Sustainer years. She has continued to stay involved by having served as Sustaining Advisor to Bloomin’ Deals Thrift Shop, she served as president of the JLNO Interior Decorating Club (of which she remains a member), she is a member of the JLNO Book Club, and she hosts the well-attended and deeply appreciated Annual JLNO Book Club Christmas Party at her Uptown home.

In addition to her work for JLNO, Claire has dedicated a lifetime of hard work to organizations in the community that she holds dear. She was a founding member of Communities In Schools (CIS) and served as its board president for ten years. In a letter of support of Claire’s nomination, JLNO past-President and 1989 Sustainer of the Year recipient, Kay Rapier, writes that by the end of Claire’s term as CIS board president, she had lead the pioneer organization from its humble roots of serving one school and a few dozen children to its modern operation of serving 2500 students in eleven public schools with an annual operating budget of $1,200,000. Claire’s leadership and vision helped to make CIS what it is today. Rapier remarks that Claire fulfills the purpose of JLNO by “epitomizing the effectiveness of a trained volunteer who has quietly improved our community.”

Claire’s fingerprints continue to impact every organization she touches and our city is better because of it. She chaired the capital campaigns to restore our City Park’s beloved Carousel and Peristyle. A historian at heart, Claire still possesses meticulous photos of the carousel’s restoration project, with before and after photos of each wood-carved animal in its full glory. In looking at the photos, one can appreciate the parallel of Claire’s quiet behind-the-scenes labor to the stoic beauty of these magnificent wood-carved animals that also quietly do their job of carrying the children of our city on their backs. Claire’s efforts for City Park did not end there, as she also served on the Board of Commissioners of City Park and President of the Friends of City Park, where she helped to oversee the Botanical Gardens Education Building, the new Administration Building, the establishment of an endowment and she helped rewrite the Articles of Incorporation and By-Laws.

Claire’s nature of following wherever the greatest need appears has helped her to discover where she needs to serve next. This is a philosophy that she lives by – and it has never steered her wrong. When she saw a skill was needed beyond her ability she reached to involve others to help. A well-respected fundraiser today, Claire remarks that when she was volunteering for City Park she did not know how to raise funds initially, but she knew the job had to get done. She sought out a class offered at the United Way that taught her the basics. Without skipping a beat, Claire recited the five basic principles she had learned years ago, “Ask the right person, for the right purpose, for the right amount, and at the right time.” The training she acquired in that fundraising class and Claire’s no-nonsense approach to getting the job done has made her a sought after fundraiser for many organization throughout our city.

Additionally, Claire’s tenacity to see a project through no-matter the obstacles makes her entirely dependable. JLNO Sustaining member, Jane Redmon, recalls how Claire’s calm and determined nature saved the day when they co-chaired the NOMA Home Tour one year. The day before the event was to launch, a problem surfaced that left them without catering for the event. Redmon remembers clearly how Claire stayed the course and immediately started calling area hotels and restaurants, before long Claire had secured catering and the tour was executed beautifully, without a glitch.

JLNO Sustaining member and 2012 Sustainer of the Year, Margaret Wall, wrote that Claire organized a group of friends to teach art as volunteers for ten years at Andrew Jackson Elementary School, when public schools had to cut art from their academic program. Wall writes, “The group went on the teach art for five years at Ben Franklin Elementary and eventually, with the attraction of additional volunteers went on to form The Enrichment Friends. The Enrichment Friends raised money for field trips for New Orleans Public Schools and are presently serving six disadvantaged schools in this capacity. Claire, as usually, took the leadership position in this undertaking.”

While recognition is not something that motivates Claire, she gains satisfaction from knowing that she got to see things through to fruition. Nonetheless, great achievements do come with recognition at times. The Friends of City Park honored her with their Outstanding Volunteer of the Year Award in 1988, Family Service of Greater New Orleans recognized Claire with its 10 Most Outstanding Persons Award in 1997, and she received the well revered St. Elizabeth’s Build Award for volunteer activism.

As JLNO members, we aim to make a difference in the community through sustained voluntarism and by becoming trained leaders who help lead the charge in our community. The goal of a Junior League membership should be to apply the skills and experience acquired in one’s Active years, throughout our entire Sustaining membership. In honoring Claire, JLNO acknowledges the lives she has changed through her immeasurable civic leadership, the organizations she has helped shape and the legacy that Claire imparts to her four children and seven grandchildren. She is self-effacing by nature; however, her firm footsteps at the thresholds of over a dozen area nonprofits characterize her enourmous success and generosity.

To understand what motivates Claire, one only needs to looks into her eyes as she simply explains that she remains open to whatever needs to get done. She remarks that friends bring opportunities and problems to her and she simply responds. Claire delights in that fact that a higher power is always involved, so when she is approached with a problem she sees it as a calling. Claire remarks, “Never say no to an opportunity to help, because you never know where that next road will lead you.” Through a smile of wisdom she adds, “It will be better than where you’ve been and your life will be enriched.” She generously explains that her life has reaped the rewards of her volunteer labor, as she has had the joy of helping the community and meeting new people along the way.

Another motivating factor is the fact that Claire consciously chooses to keep a positive attitude on life. She surrounds herself with positive people and she does not let the baggage of negativity have a place in her life. A book that changed her life is How a Man Thinketh by James Allen. This 1902 literary essay offered Claire a roadmap to live her life in a joyful mindset, to hold her character accountable, and to embrace the challenges and joys that life brings. After a lifetime of Catholic education, it is not that the words on the page were new to her, it is that they ignited that ah-ha moment in her young life and helped her to self-articulate how she wanted to live her life.

Claire’s activism teaches us all to embrace the road ahead and to never say no. She views her life as a custodian of opportunities that others have graciously bestowed upon her. For the next generation of young people, Claire suggests that they “remain open to where the road will lead you – be open to anything – and you will find happiness.”

Claire is married to Harry Stahel and together they have four children: Helen, Harry Jr., Marie-Claire, and Elizabeth. Claire’s has seven grandchildren: Olivia Stahel (Helen), Matthew, Andrew and Charlotte Stahel (Harry, Jr.) and Madeleine, Warren and Grace Mears (Marie-Claire). This summer, Claire will take her eldest granddaughter, Madeleine on a trip abroad to London and Paris. When she’s not saving our city, Claire plays a mean game of tennis and loves good movies, lunch with friends and playing bridge – except when her grandchildren are visiting, in which, case she like to play cards with them and watching them play in her garden.