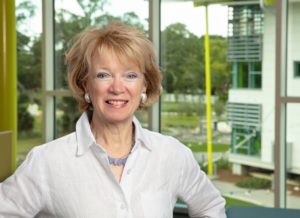 Many talented and dedicated women grace the Junior League of New Orleans with a commitment to serving the community and assisting other women in reaching their full potential. Among those women are a few who dedicate their lives to service in the Junior League and beyond. Such women continue service through the Junior League even after transitioning from an active member to a sustainer -someone who has retired from league obligations while maintaining membership and volunteer status. More importantly, those women continue to contribute tireless efforts into community development and other acts of humanitarianism imparting a lasting effect on society.  Here at the Junior League of New Orleans, we recognize those women with a nomination for Sustainer of the Year. Thereafter, fellow sustainers cast a vote to select the year’s honoree.

Ms. Julia Bland, a native of Knoxville, Tennessee and long-time member of JLNO, has been selected as this year’s Sustainer of the Year. When asked to reflect on her decision to become a member of the Junior League, Ms. Bland, the daughter of a former league member, vividly recalls her childhood. She discussed how her mother would load meals into the back of their station wagon and she would go along for the ride as those meals were distributed to persons in need throughout the city. Voluntarism has since become a way of life for Ms. Bland. Having served JLNO in various capacities over the last couple of decades, Ms. Bland’s most memorable assignment was serving on the Executive Committee. There she was thrilled to have been part of a team of women who set the trajectory for the future of JLNO. Further, Ms. Bland was able to offer her expertise as a professional administrator as well as gain new skills. From that experience, she offers the following guidance to newly accepted JLNO members (Provisionals): ‘What you gain (as a member of JLNO) is proportionate to that which you invest into your league commitment. It is important to take advantage of the opportunity to be trained in many different ways. That is the beauty of JLNO…consider the experience as a time of continuing education through people who know more than you. It’s the sum of the parts that add up to the meaningful result’.

As a sustainer Ms. Bland remains connected to JLNO through her contributions to the discussions and initiatives addressing climate and global issues as well as research for books, sustainable gardening, monthly social and league business gatherings. She expresses a fond appreciation for the gardening club and maintaining a social network with other league members. Her advice to active members transitioning to sustainers is to reflect on the training provided by JLNO and use it! From corporate America to nonprofits and even personal hobbies, think of the resources and information gained and understand that there is still room for personal and professional expansion.

As stated by JLNO’s Sustainer of the Year committee chairperson, Alice Wright. “The surprise visit to tell Julia she was being honored as the JLNO Sustainer of the Year had to be rescheduled three times because of Julia’s hectic schedule. Her husband, Will, had to keep the secret and to keep changing the date. The ploy he used to get her home by 5:30 was a visit from her three grandsons…and she couldn’t pass that up!”

Ms. Bland currently serves as director of the Louisiana Children’s Museum and has been pivotal in the expansion of the museum into a globally unprecedented state of the art children’s museum. She credits her experiences as an active member as having provided her with the tools and learning experiences required to make the expansion possible. Ms. Bland expresses a sense of honor and excitement as JLNO’s newly elected sustainer of the year. Nonetheless, she believes that it was her contribution to society and that which she does within and for the community as basis of her having been selected for such an honor. In her own words, Ms. Julia Bland offers, “Even more important is the contribution to the community. Having second graders to tell me that they would like to become an engineer or a scientist because of their experience at the museum is the greater reward. Even having adults in their twenties and thirties to discuss how the museum has impacted their life’s journeys and the trajectory of their careers”.

Julia has been the recipient of many awards and honors including the Young Leadership Council’s Role Model Award, St Elizabeth’s Role Model Award, YMCA Role Model Award, City Business Woman of the Year Award (one of three). She has also been recognized in her hometown where she was honored as the Outstanding Alumna of the Year from the Webb School of Knoxville. And, she has been honored nationally with the National Medal for Museum and Library Service, in recognition of service to its community and the nation, an award presented by Michele Obama at the White House. She was invited by President Bush as a community leader (1 of 15) to mark the second anniversary of Katrina.

Well regarded within the community, Julia has received many letters of support for her current honor. Once such supporter offered, “Julia with her passion for and her dedication to the early development of children beyond the walls of the Louisiana Children’s Museum, has been an active and vital participant in an early childhood coalition. Together with an impressive network of people and organizations she has consistently championed access to and public funding for quality childcare in our community. Her voice has been critical to successfully securing funding including a 1:1 match from the state to cover the cost of child care for many low income residents. It seems when Julia speak, politicians listen”.

Julia and her husband Will, an attorney, have three sons: Will, Webb and John. She is “Gran” to Wilton, Ford and Robert.