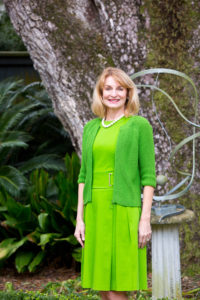 Esteemed member of the Junior League of New Orleans (JLNO), Melanee Gaudin Usdin has been named JLNO’s 62nd Sustainer of the Year.

Since 1958, JLNO has presented the prestigious Sustainer of the Year Award to a sustaining member who exemplifies the organization’s educational and charitable mission. Recipients of this honor have demonstrated a commitment to promoting voluntarism, developing the potential of women, and improving communities through their commendable action and leadership.

Melanee Usdin has been a member of the Junior League of New Orleans almost as long as she’s been a New Orleanian. Born and raised in the Crescent City and a graduate of both Metairie Park Country Day School and Tulane University School of Law, Melanee has a deep connection to the city that compels her to play an active role in its future.

Voluntarism was a family affair and something that came naturally to Melanee from the start. From the time she was a young girl, her mother and father instilled a responsibility of service to others in her heart. It was a forgone conclusion that when the time came she would join Junior League. “I was always aware of the importance of the Junior League,” Melanee said. “It was considered an honor to be in the Junior League, and that’s how I felt about it.”

Melanee was JLNO’s President from 1999 to 2000, and highlights of her presidency include publishing and selling the Crescent City Collection: A Taste of New Orleans cookbook and the launch of the first JLNO website. One of Melanee’s biggest undertakings was pioneering the Junior League Endowment Campaign, which has grown to $3.2 million.

Melanee has made numerous contributions to the community. Her personal passions gravitate towards the arts. While serving as Chairman of the Board of KID smART, she promoted their mission to teach public school children their core curriculum via visual arts. Through a partnership with Poydras Home and the New Orleans Museum of Art — two organizations where Melanee currently serves as a board member — she is especially proud of their joint program that brings residents struggling with Alzheimer’s and dementia to the museum.

One of her dear friends admired Melanee’s tenacity when she said quote “Melanee does not put things aside to be dealt with at a later time and is not afraid to tackle issues that may present challenges. She is a consensus builder and actively seeks the opinion of others that she works with.”

Melanee exemplifies the Junior League mission, and we hope that we are continuing to honor her contributions through our current activities.

Read more about Melanee’s accomplishments in the Spring 2018 issue of Lagniappe magazine.

Nominations for the Sustainer of the Year award come from JLNO’s Sustaining and Active membership. A committee then reviews nominations and letters of support to determine the award recipient.