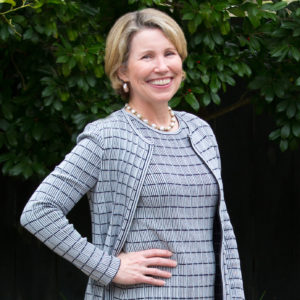 Today, many tend to think of “girl power” as a millennial phenomenon, when young women serve as bright, new examples of progress to mothers and grandmothers. The truth is that females have been blazing away at that trail for decades, sparking the change the latest generation now strives to grow. Just look at Junior League of New Orleans Sustainer of the Year Katherine “Katie” Andry Crosby, a modern New Orleans woman who defines the idea of having it all, from stay-at-home mom to Chairman of Fidelity Bank.

In the late 1970’s and early 1980’s, Katie earned her degree in Business Administration from Vanderbilt University (1983), married E. Howell Crosby (July 1984), began a family and followed in her mother’s footsteps when she joined the Junior League of New Orleans.

“I joined the League in 1988,” Katie says. “At the time, my two older children were ages two and one. I was familiar with the League because my mother was a Sustainer. As a child, I remember her working on placements in children’s theatre and on the Follies fundraiser. From my perspective then, it seemed like fun! The League offered me an opportunity to meet and interact with other women and to be involved in the community.”

Katie relished being at home to raise her growing family of three children and working on a variety of JLNO committees: Cookbook, Lagniappe, Community Assistance Fund, Holiday Marketplace and Placement. The native New Orleanian began tackling JLNO leadership roles in 1995, when she assumed the office of JLNO Treasurer, followed by Nominating Chair in 1997, President in 2000, Endowment Campaign Steering Committee from 2001-2003, Nominating Committee Advisor in 2002, and finally Sustaining Advisor to the Board in both 2004 and 2013.

“My League involvement helped me to learn about fundraising, community organizations and how the League operated,” Katie says. “It was important to me to choose placements across the community, fundraising and internal League workings for education and variety. I learned a lot about leadership when I served as a committee member and ultimately chaired the Nominating Committee. Ensuring that all voices were heard and that all opinions were respected while working towards consensus was critical to the process. It continues to be an important leadership trait for me.”

Indeed it does, and it’s a trait that has served Katie well. The Country Day alumna has held multiple leadership positions besides her JLNO service, including serving as a Board Member for the New Orleans Branch of the Atlanta Federal Reserve Bank, on the Selley Foundation’s Board of Trustees and as a WYES-TV Board Member. She credits the lessons she learned from her JLNO service with helping her to tackle these and other challenges in life.

“As I reflect on my time in the League and how it influenced my future, what stands out is how the League gave me confidence to accept placements that may have been out of my comfort zone,” Katie says. “While I may not have believed I had the skills to step into certain roles, members that I respected did, which encouraged me to take those scary steps, especially when asked to be Treasurer and, later, President. Each time that happened, I learned and gained confidence. I also learned to ask lots of questions and to ask for help when needed.”

Katie’s largest leadership challenge came in 2003, when she became the first female director in the history of New Orleans-based Fidelity Bank. Besides the pressure of being the first woman to hold this position, Katie also had family expectations to meet. She’s the great-granddaughter of Allain C. Andry, Sr., one of Fidelity Bank’s original founders.

“Being the first female director of Fidelity Bank was both invigorating and intimidating,” Katie says. “Not only was I the first female director, but I was also significantly younger than my fellow directors. As a young director, I challenged myself to learn all that I could about the business of banking in general, and Fidelity specifically, so that I could actively engage in Board discussions. It was important to me that my fellow directors saw me as a peer that added value to the conversation and perhaps a slightly different perspective. What I learned is that we all earn respect through hard work and commitment.”

If the load of family, career and volunteer service weren’t enough, Katie added another role shortly after becoming a director for Fidelity Bank. In 2006, this mom of three and volunteer extraordinaire concluded she could grow more personally and professionally. She decided to return to college, a daunting goal she knew she could achieve after reflecting on her JLNO experience.

“The confidence JLNO gave me was especially important when I decided to pursue my MBA at age 45,” Katie says. “While that was a big hurdle, I was encouraged remembering all of those times at JLNO when I learned tremendously from placement opportunities that felt challenging.”

Although her life was brimming, Katie decided to pursue her graduate degree when her youngest son was a freshman in high school and her two oldest children were in college. The driven mom wanted to ramp up her professional life as her children were leaving or preparing to leave home. Her role as a director with Fidelity Bank required some time commitment, but she knew since her children were growing, she had more to offer.

Katie was accepted into Tulane’s A. B. Freeman School of Business. Tulane’s Executive MBA program runs for 18 months with classes every other Friday and Saturday. It’s designed for employed students that have attained a certain leadership level within their professions. Katie did not fit that exact description, but her admirable service to JLNO helped pave the way for her acceptance into the program, despite her nontraditional resume.

“While I was not employed full-time, my role as a director at Fidelity Bank, and also my volunteer experience, including JLNO President, provided a unique perspective,” Katie says.

She received her MBA in 2007 and also became a member of the exclusive business honor society Beta Gamma Sigma. Katie then channeled her energy and education into Fidelity Bank and became Chairman of the Board in 2010, a position she still holds today.

Her closest friends and fellow JLNO sustainers are not surprised by her success. Melanee Usdin has known Katie since grammar school and was President of JLNO in 1999, the year Katie was President-Elect.

“Katie is a team player. She brings to the boardroom many talents: financial expertise, community experience, professionalism and, most importantly, an ability to build consensus,” Melanee says. “Katie is unflappable; a total delight to work with. She’s easygoing but committed. She’s knowledgeable, smart and experienced, but always respectful. She seems to have struck that enviable balance between work and family, between professionalism and a genuine personal interest in others.”

Katie’s interest in others has kept her actively involved in the League well into her sustainer years. She and her husband now have four grandchildren, but she still finds time to volunteer with many organizations across the city, including JLNO.

“As a Sustainer, I have been honored to serve as Sustaining Advisor to the Board two times and also as Sustaining Advisor to the Nominating Committee,” Katie says. “My favorite part of serving in those roles has been meeting members and keeping abreast of League activities. Ironically, the challenges are [much] like those we faced when I was an active, including membership requirements, community involvements and fundraising. The Diaper Bank is serving such a huge need in our communities and is a great project for JLNO.”

Katie is a shining example of how impactful sustainers are to the mission of JLNO and the city of New Orleans. Her service, not just as an Active but also as a Sustainer, was a significant part of Wendy Beron’s decision to co-nominate Katie for the honor of JLNO Sustainer of the Year. Wendy is also a JLNO Sustainer and Past President, who now serves as President and CEO of Methodist Health System Foundation.

“Not only did Katie do an amazing job during her active years, but she has assisted JLNO at every turn as a Sustainer — with personnel issues, Thrift Shop and Endowment efforts and as a Sustaining Advisor to the Board,” Wendy says. “When you are lucky enough to get Katie on your board, she always goes above and beyond and never with the focus on herself. She comes prepared, and her contributions are thoughtful and on-point. Don’t just take it from me. Look at her service in community organizations, besides JLNO, all who quickly catapult her to leadership positions.”

In addition to Katie’s roles with Fidelity Bank and as an impactful JLNO Sustainer, she currently serves on the Children’s Hospital Board and as Board Chair of LCMC Health. All these accomplishments — a successful career, a loving family and a myriad of community service commitments — beg the question, “How does Katie do it all?”

“My family has been incredibly supportive, and my husband, Howell, is my biggest cheerleader,” Katie says. “Throughout my active years at JLNO and continuing today, he is always encouraging me to ‘Go for it’ and accept the opportunities and challenges.”

“Go for It” is a mantra Katie has clearly taken to heart and one that we can all use to inspire and empower our own lives.

Article written by Jen Hale with photography by Jessica Bachmann.