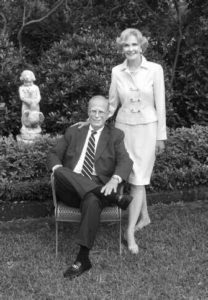 Such a beloved figure in our community, everyone assumed she had long since been numbered among those distinguished. But this is in fact Ruthie’s much-deserved year in the League spotlight, and as it turns out, the recognition couldn’t have come at a better time.

The embodiment of true leadership, Ruthie has risen to the Katrina challenge and fostered new confidence in her community through a 53,000-volunteers-strong initiative, Citizens for 1 Greater New Orleans.

Her reaction? “It was a huge surprise,” and she adds graciously, “very humbling.”

When Ruthie joined the League nearly 40 years ago, she hit the ground running.

By her third year, she had assumed a three-year placement as Chair of the Plantation Cookbook Committee, and experience she describes as “off-the-chars wonderful. It was an opportunity to stretch and grow.”

In her capacity as Chair, she oversaw sub-committees of researches, writers and cooks; traveled to plantation homes, initiated a marketing campaign, and corresponded with Doubleday Publishers.

The book was of course a runaway hit. It won the James Beard Best Cookbook Award and continues to be an importance revenue source for the League today.

Ever the go-getter, Ruthie set a goal that by the end of her Plantation chairmanship, the cookbook would appear in the Neiman Marcus catalogue.

Many of her fellow League friends member the humorous story of her telephoning for “Mr. Neiman Marcus” at the company’s Dallas headquarters, and they kindly connected her to Edmond Marcus. The story ends – Neiman’s sent out 110,000 flyers fro the cookbook and feature it in two consecutive issues of the catalogue!

“You learned by the seat of your pants, and enthusiasm got you through sometimes,” she muses.

Ruthie has always found great inspiration from working with others. As a young volunteer, she encountered great encouragement from League Presidents like Cynthia Hammond, who demonstrated the importance of teamwork, a theme that would echo throughout all of Ruthie’s accomplishments.

“Cynthia shined when it came to putting the light on others. She has a great deal of courage,” Ruthie said.

Among her mentors, Ruthie sites other great women of the League, “Marion McCollam, Bonnie Conway, Jackeen Churchill – really, I could mention every single President that I have had the privilege of working with”.

After chairing the Educational Committee and serving as Treasurer, Ruthie became League President herself in 1978.

It is one of her proudest lifetime accomplishments. She saw the “big picture” of the League for the first time, and was impressed by the diversity of talents among members who were all focused on a common goal.

The Ways and Means projects that year were the Jambalaya Cookbook and the Decorator’s Show House.

“It was astonishing to see how much we could achieve, and how we went a bout planting seeds for the future,” she says.

Some of those seeds included the Parenting Center, the Louisiana Nature and Science Center, and the Preservation Resource Center, which was in its infancy at the time – all thriving organizations today.

“That’s what happens in the League. We lay the groundwork through research and planning; we determine our commitment and that of the community, and through our sustained efforts, we establish sound projects that have meaning for the future.” she says.

Many of her fellow League volunteers continued to support these organizations and help bring them to fruition. Ruthie herself later served as President of the Louisiana Nature and Science Center, raising $300,000 through the famed Dinamation Exhibit.

Before the inception of all her projects, Ruthie embarks on a trusted creative process. She becomes her own devil’s advocated in order to identify, evaluated and plan for any obstacles. Then, fully prepared and confident of success, she takes action. And the first step is to gather a team.

During her many years of leadership in the League, Ruthie found that she had a knack for identifying people with special talents. She also appreciated the importance of voting and project buy-in by all members. She became an enabler – matching skills with needs, delegating to create effective teams, and instituting a sense of project ownership. In so doing, members under her guidance were able to propel projects directly to their goals and beyond.

Ruthie’s whole-hearted investment in League endeavors was later echoed in her real estate career. From the start, she decided to make a personal financial investment in her profession by hiring an assistant, purchasing a fax machine (even before her broker’s office had one), establishing an advertising campaign, and most importantly, building relationships with clients, other agents, financial experts, inspectors and the public at large. She found that through this devotion, she derived a great deal more pleasure from her work, not to mentions success!

She has been recognized as the Number One Top Residential Producer five times by the New Orleans Metro Association of Realtors, and 10 times by Prudential Gardner Realtors.

Throughout her professional career, Ruthie has remained a devoted community servant, especially in the realm of education. She has served on the boards of Isidore Newman and Louise S. McGehee Schools and chaired the School Volunteer Services for the New Orleans Public School System.

She also served on the Mayor Ernest Morial’s task force on Public School finance. In a recent interview with Southern Woman magazine, Ruthie sited the Junior League as one of four influences (her parents, husband and McGehee School being the other three) in her life that invoked her altruistic spirit. As a friend Janet Bean states, “She personifies the professional level of volunteer leadership that Junior League training provides.”

Ruthie’s message to League members today is to “stretch beyond what you think your limitations are.”

She advocates that all League members be involved in citizen activism.

“We need to see reform through citizen involvement now as ever before because our city has faced the greatest national disaster this country has ever known,” she says. ‘People must come together in different ways, whether in education, health system, neighborhood renewal, levees, etc, in offer for us to revive and rebuild New Orleans.”

Ruthie’s community involvement is bolstered by an unwavering faith. As a child she even dreamed of being a minister. At age 28, she was ordained as an elder and elected to the highest governing body of the church, the Session, on which she served for 20 years, chairing several committees along the way. She served on the Presbytery of South Louisiana’s Ministries Committee, a group of which assisted ministers in their times of trouble. Her pastor, Kenneth Phifer, recommended her to the Board of Trustees for Rhodes College, a position which she gladly accepted for six years.

In her precious free moments, Ruthie enjoys reading historical biographies and theological literature. And her greatest recreational joy, as any who have been entertained by her know, is flower arranging – a talent she has honed to an art form.

Ruthie’s is blessed with an encouraging husband, Lou, whom she considers to be her best friend, and with two sons, Lou Jr. and George, and a grandson Brice, “my heart.”

She readily declares that it is out of love for her children and grandson that she continues to take action to help ensure the city’s posterity. It has become her mission to set in motion a future in this city that will be fruitful and fulfilling for young families as her life has been thus far.

Harriett Hurley Nelson offers the following praise: “She has amassed an extraordinary resume while being a full time wife and mother, a top real estate agent and caring good friend. She does all this with great humility and a natural elegance which is reflected in her exquisite taste. I know of no one more deserving of this honor.”

Ruthie! Congratulations and thank you for your excellent service.